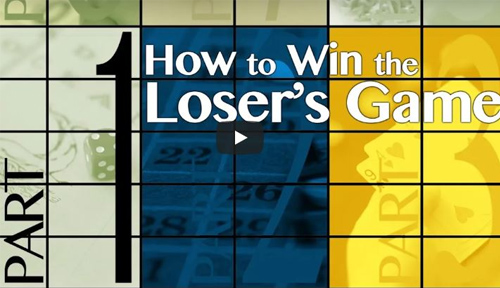 The documentary from Sensible Investing TV sets out to de-bunk the notion that, when it comes to investing, you get what you pay for.

Robin Powell`s documentary – shown in ten short weekly instalments, is a must-view for anyone who takes long term investing seriously.

The  link to the first video follows:

How to Win the Loser’s Game

Most of what we see and hear about how to invest comes from
either the fund industry or the financial media – both of which
have their own agendas. This landmark documentary is an
attempt to redress the balance.

Nine months in the making, How to Win the Loser’s Game aims to
provide ordinary investors with the information they need to
achieve their investment goals. It explores the relative merits
of active and passive investing, as well as so-called “smart” beta
– a “middle way” approach that is gaining in popularity.

Among the contributors are some of the biggest names and
brightest minds in the investing world, from Vanguard founder
John Bogle to MoneyWeek editor Merryn Somerset Webb,

How to Win the Loser’s Game is being released in ten weekly,
stand-alone parts, on SensibleInvesting.tv, followed by the full-length, 80-minute film.

“The fund management industry as it stands is failing the
consumer. There are too many managers delivering consistently

poor returns while taking huge amounts out of people`s long-

term savings in charges. Investors need to wise up.
“We do recommend that investors use an adviser. But this
documentary will help them get started on the road to a
successful investment experience.”
Richard Wood, founder, Sensible Investing.tv

“We keep hearing from active fund managers that they can
beat the market. But only about 1% of them do so consistently,
and they’re almost impossible to identify in advance.
“How to Win the Loser’s Game presents hard evidence – tried,
tested and peer-reviewed – that there are better and far cheaper
ways to invest.”
Igors Alferovs, Barnett Ravenscroft Wealth Management

“As well as investors, this documentary is compulsory viewing
for journalists and politicians.
“It’s well known that we face a pensions crisis. The emphasis so
far has been on the need to put more more money into our
pensions. It’s true that most of us have to. But we also need to
wake up to how much the industry is taking out of our savings –
and how little value it’s adding in return.
“Investors – and the wider economy – would be better served by
a fund management industry 20% its current size.”
Robin Powell, producer, How to Win the Loser’s Game

This Brexit business seems to have been going on for ever. Whatever constitutes normal everyday…

Knowing the Price of Everything (But the Value of Nothing?)

Just why is the cost of authorised financial advice now out of most people`s reach? …

I learnt something new this week. Apparently, according to one leading external asset manager: “The…

Money-Guidance.co.uk only contains general financial information and does not constitute advice or a personal recommendation in any way whatsoever. All the services we offer are delivered on a non-advisory basis. If you are at all unsure of the suitability of any particular service for your circumstances you should seek independent financial advice. Please refer to our Regulatory Disclaimer and Privacy Policy for further information.

© Copyright 2014-2019.
Money Guidance CIC is a non-regulated business, designed as a social enterprise rather than for the benefit of company shareholders